As cases continue to pile up in the courts, there is an urgent need for civil society to come up with ways and means of measuring the judiciary’s performance and to analyse the root causes for such delays. The need is greater in tax-related litigation, where outcomes are believed to affect investments and business confidence.

Two recent developments relating to the functioning of the Income Tax Appellate Tribunal (ITAT) are significant. The first is the ITAT asking parties to give advance notice of adjournments so that cases listed are actually heard, rather than being adjourned many times over. However, this instruction has been kept in abeyance due to ‘practical difficulties’. The second and more important one is the appointment of 35 additional members to the ITAT. In February 2015, the Supreme Court of India had chastised the central government over delay in appointing members to the ITAT (as well as other tribunals).

To appreciate how important these developments are, one needs to review the trend in pendency of cases before the ITAT and the strength in terms of members. The ITAT itself does not disclose pendency or other metrics. What information is publicly available is that published by the All India Federation of Tax Practitioners (AIFTP) in its journal once or twice a year. This information is of course sourced from the ITAT registry. While the ITAT has benches in over 28 cities, for my purpose, I have compiled here data for the top seven cities that account for about 80 per cent of the number of cases. The bench-wise trends over a five-year timeline paint a stark picture.

Figures 1 and 2 show that over a five-year period, while the number of outstanding cases has more than doubled, the number of members on the benches has actually reduced! (Tables 1 and 2, listed at the bottom of the table, give the detailed break-up of these numbers.) 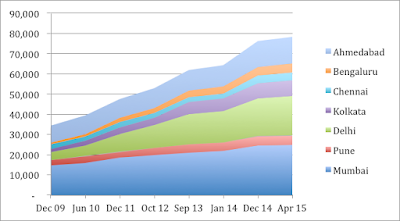 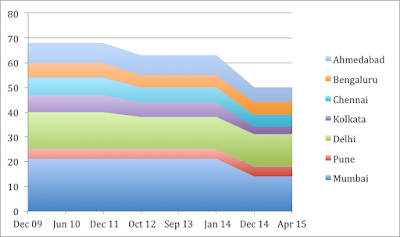 Note: Figures considered are before the appointment of 35 additional members in April 2015. The city-wise mix after taking this into consideration will be updated as soon as this information becomes available in the public domain.

A city-wise mix of this information, shown in percentage terms in Figures 3 and 4, throws up even more interesting trends. 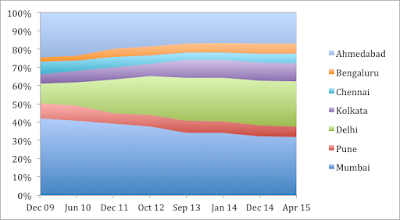 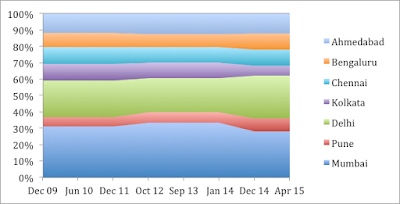 Note: Figures considered are before the appointment of 35 additional members in April 2015. .

A review of the trends illustrated in Figures 1–4 (based on the information in Tables 1 and 2) leads one to note some significant points:

The recent appointment of additional members is definitely behind the curve, that is, it happened much after pendency increased significantly. While it may have led to an increase in the overall strength of members at the ITAT, city-wise appointments need to be on a rational basis so that more resources are allocated to those locations with greater pendency. If such metrics had been constantly monitored by civil society, and action taken based on the disclosed findings, pendency may have been at manageable levels.

However, as the discerning reader would have observed, one cannot draw satisfactory conclusions about the functioning of the ITAT from the data available. This is because of paucity of publicly available data. An institution as important as the ITAT must be assessed by civil society, just as any other institution of governance.

In this aspect the ITAT is not alone. There is, in general, paucity of information regarding the functioning of the judiciary in our country. Being one of the three pillars on which democracy stands, and arguably the strongest of the three, the judiciary should be subject to as much assessment as the other two, the legislature and the executive. Civil society needs to develop metrics and scorecards to measure the functioning of the judiciary. Such an exercise would help immensely in identifying changes required to legal processes, or even the law itself.

A significant step in this direction is being taken under the ‘Rule of Law’ project by DAKSH, a Bangalore-based organisation, whose primary objective is putting together data about the Indian judicial system. Once the data compilation is completed and made available publicly, many interesting aspects of the working of our courts can be studied in detail. This quantitative and empirical approach should lead to informed public debate about judicial performance in the country, with a view to finding meaningful and sustainable solutions.

As an illustration, Figure 5 shows the average rate of disposal of some types of cases during 2014 and the first quarter of 2015 in the High Court of Karnataka:

The next step could be further analysis through comparing metrics across different courts, over various periods of time, other case types, and examining the root cause for differences.

For instance, if more information were available about the ITAT, one could have delved into questions such as:
Such a quantitative analysis would be just the beginning for further qualitative review.

A foundation for an empirical analysis of judicial performance is only now being laid and not enough can be said about its significance. One hopes that this will lead to the establishment of a framework for measuring the performance of our tax courts.

Table 1. City-wise Split of Cases Pending before the ITAT

Table 2. Number of Members on Various ITAT Benches
Note: Figures considered are before the appointment of 35 additional members in April 2015.
Posted by Surya Prakash B.S at 03:08 No comments: